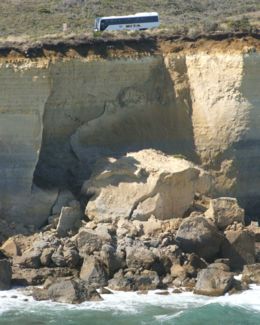 Just prior to that an entire sea cavern catastrophically collapsed at the Bay of Islands.

The fragility of the Port Campbell coastline is obvious.

This natural process can be hastened by human activity such as large excavations and building foundations near the cliffs.

Prominent geotechnical specialists have advised the Government that the proposed Southern Ocean Beach House’s overscale excavation and foundation near 4 major sea caverns is high risk and may accelerate collapse of the Port Campbell headland.

They also warned of the high public risk and liability to public and private land. 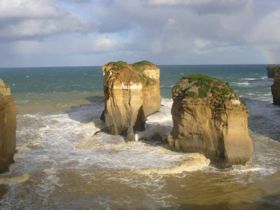 If one of the larger caverns on the Port Campbell headland collapse, the Southern Ocean Beach House and the roadway and port will be unviable.

Typical of the seas of the shipwreck coastline.
Images from Sherbrook River – Loch Ard Gorge, a ten minute drive from Port Campbell