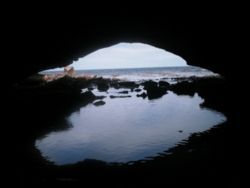 The caverns were formed by groundwater draining from the land along natural joint lines.

New caverns are opening up in the bay and joint lines appear to run through the proposed development site.
Diagram Courtesy of Dr Eric Bird.