Geo-specialists reported to the Victorian Civil & Administrative Tribunal (VCAT): I see this large proposed development as an environmental threat to the Port Campbell National Park and a high liability risk.

This is an extremely fragile headland which protects Port Campbell from the Southern Ocean and must be treated with care.

It is hazardous to build structures (particularly large buildings) near these cliffs and caverns because of the risk of damage resulting from their collapse, and of consequent injuries or deaths. There is the question of legal responsibility if such structures are permitted (geotechnical advice having been ignored), and a collapse then occurs.

I strongly advise against any extension of the roadway, large or small, onto the headland, as the liability issues which saw the Great Ocean Road relocated away from this area are still relevant.

The potential for collapse, especially with increased channelled runoff, is very high.

The area is subjected periodically to heavy storms. In such situations significant volumes of water runs off and infiltrates the ground. Especially after long periods of drought as has been experienced in the area for the past 10 years, the limestone is increasingly prone to collapse. The limestone has high porosity and this dries out over time. When heavy rain occurs the fine intergranular voids and joints are filled with water and collapse occurs.

The coast here is unstable because of recurrent cliff collapses and hazardous because the coastal fringe is underlain by many linear caverns.

I am constantly amazed by people want to spend so much money on developments which have such problematic stability issues, but choose to ignore such problems. Runoff can result in rapid development of cavities resulting in collapse. This can be in the order of tens of years rather than hundreds of years.

The sea cavern located immediately west of Beacon Steps may extend to or under the area of the proposed development.

Lineation [joint lines] are likely to extend through the area of proposed development.
The area is unstable and prone to active erosion, and this development is high risk.
Collapse may be without warning, sudden and catastrophic.

An Environmental Impact Statement should be carried out to fully assess the impact of the proposed development on this section of the headland.

Disruption to the groundwater flow could cause accelerated flow in other locations and could result in ground collapse and or accelerated cliff activity and collapse.
Collapse of the major cavern to the south of the proposed development could occur at any time. It is possible that this would involve a sudden cliff face recession of up to 45 meters.

” There are also indications that there is renewed erosion activity along the eastern side of Port Campbell Bay, immediately in front of the proposed development, with recent minor collapse, and the appearance of seepage tunnels aligned in a south easterly direction [i.e., toward the development site].” 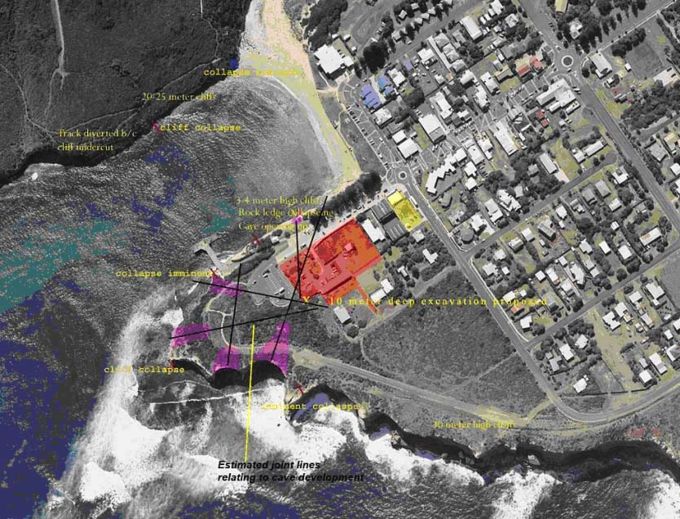 Estimated cave area and the “joint” lines (black lines).
The pink shaded areas are the estimated cave areas.
The black lines drawn by a karst specialist are the estimated joint lines – note they intersect in the area of the newly found tunnel. It is also the area where the development requires more Crown land to exit its reception area and buses.
‘X’ is the site proposed for an approx 10 meter below natural ground level excavation.  ’X’ is also the area where the development also proposes to run their draining easements. Geospecialists warn that leaking pipes could accelerate cavern collapse.